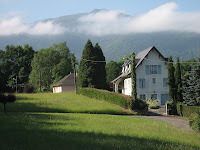 This was the final leg on our three year effort to complete the Arles Route pilgrimage path to Spain. Last year was sort of difficult - not enough stimulation to warrant the physical effort. This year everything worked. There was a lot of rain, but that made for stunning skies, and in Spain, every few hours there is a cafe or bar where you can take a break and a snack. That made all the difference. I put an overview on YouTube if you want more photos. 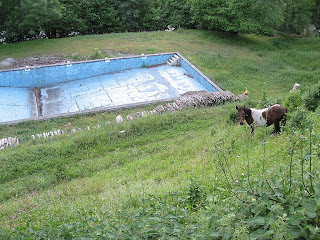 We flew into Pau, caught a train to Oloron, and were at Hotel de la Paix the same afternoon, well positioned for the three day trek up the Valley of the Aspe to Somport Pass at the crest of the Pyrenees. The trail is a mix of roads and tracks the first day, everything green and glistening due to the recent rain. The normal first day ends at Sarrance, but we cut that a little short, staying at Fontaines d'Escot - 18 kilometers out. The place was a crumbling old chateau, gradually being restored. The last half mile before the chateau was a real forest trail, narrow, beside a canyon, a few washouts and trees across the trail. This section and the start of the next day had the vegetation of a northern rain forest. Moss and ferns all over. There was a fern that we call the Birds Nest Fern growing wild - the only place we have seen it in all our walks. 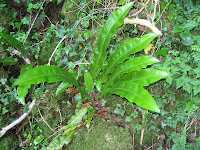 The next two days seemed like something out of Sound of Music, you expect the Trapp family at any moment. A stay at Borce, or actually at Etsaut, just across the river, and then up to Somport pass. Much of the route parallels an old railroad which tunneled through the Pyrenees, but has not been used for many years. On this final day up to Somport, we opted to follow the road, since the guidebook said the views were better from the road than the trail. No big wildlife, but lots of birds, lots of small brown lizards, and a few large brilliant green lizards. Of course cows with bells. 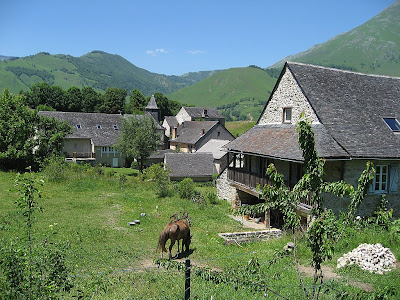 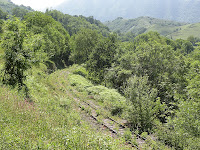 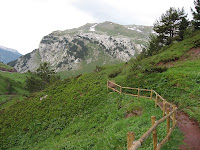 At Somport you cross into Spain and a much different infrastructure. Money obviously has been poured into the Camino Aragones. I don't know how they can possibly cover their costs. There are many miles of new trail, new fencing, new bridges. There are places to eat between the start and end of the day - not always so in France.

To the wildlife score, add lots of black slugs, maybe a world record in slugs per meter, and one black and orange salamander. 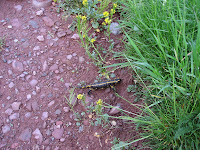 On the Spanish side of the Pyrenees there are some Yosemite class waterfalls coming seemingly from the top of the mountains. Did I mention there were wildflowers all over? We usually hike in Sept, but I am beginning to like spring better, even with the rain.

We are fairly well prepared for rain, with a parka pack cover combination that can be worn as a pack cover, and at the hint of rain, just stick your arms thru the sleeves. The big problem with rain is the difficulty of finding a place to take a break. In Spain there seemed to be a bar, cafe or barn when needed. There was an old church, Ermita de la San Juan Bautista that had a steel cover to protect it until restoration happened. That came along just at lunch time - and so forth.

I have learned from prior trips to look up in the churches. Look at the entry ways, at the pillar tops. The carving is sometimes wonderful, and the subject matter is always interesting. 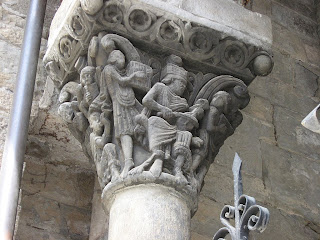 At Villanua the tourist office was right where the trail entered town, and pointed us to a private home with rooms. We chose a private room when we had the option, but the refugios were not filling up.

The next day was Jaca where we stayed two days, so we could take a side trip to San Juan de la Pena. This is a must do trip for anyone doing this route. This monastery has been built into a cliff wall and is of massive proportions. You can have a taxi take you up, wait for an hour and take you back to Jaca. An hour is enough time for the first visit.

Just a couple of shots: 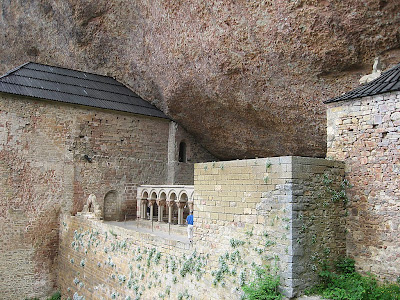 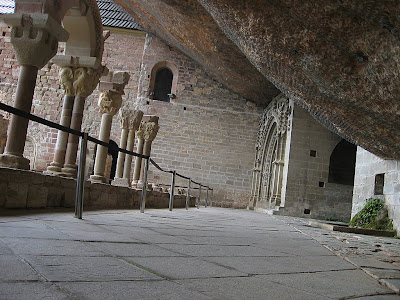 .
After Jaca, at Puente la Reina de Jaca, we ended up in an apartment hotel which had a washing machine in the room. A definitely unexpected bonus.

Following Puente la Reina de Jaca, the GR 653 continues on a road suitable for bicycles, while an alternate route goes through the old pilgrim town of Arres. I strongly recommend that you go through Arres. A view from that trail: 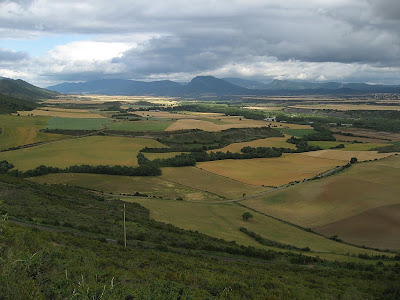 We were trying to make this more like a vacation than on some of our trips, so our ground rule for distance per day was 20 kilometers. If something was over 23 kilometers we would look for something shorter.This only caused us to leave the GR 653 once. After Sanguesa there is a 31.5 km stretch with the point at the end being a refugio with only 8 places and no food or other facilities around. That was too much risk and distance for us so we took an alternate route that was in the Confraternity of St. James guide, going through Lumbier. This worked fine as far as places to stay, but the return route from Lumbier to the GR 653 goes through an area that has had major highway construction since the CFSJ guide, so we ended up walking about 8 km along the edge of a major road, fenced off from cutting back to the GR where the guide indicated. If you should take this route, don't go into Aldunate, just walk up the road until Izco. The Aldunate route arrows now point directly into a blackberry wild rose thicket and you have to scramble through/around up to the highway.

Eunate was the highlight of the next couple of days. I had missed this on our first trip, and had wanted to see it ever since. It did not disappoint, but we did start seeing relatively large numbers of pilgrims. 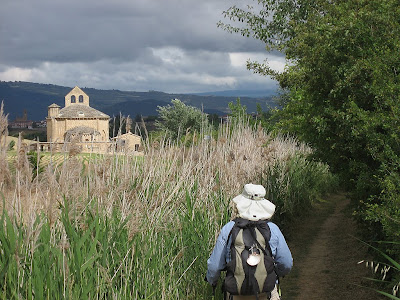 After we joined the main Camino Frances at Obanos, we continued on the main route till Logrono, where we caught a bus to Bilbao and flew home. The last time we were on this section from Obanos to Logrono was in 2001, and I had difficulty recognizing it. There has been a lot of work, and I think rerouting. The trail for this 40 mile segment is now appropriate for bicycles most of its length. The surface frequently is hard packed gravel, or stones set in mortar, about 8 to 10 feet wide, and fine for bikes, but hard on walker's feet. 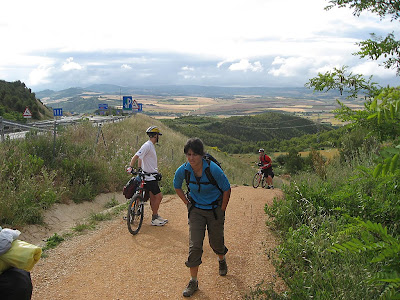 This was a great trip for us. There were some difficult moments, as always, but the country was stunning, and we enjoyed being back in Spain more than we thought we would. 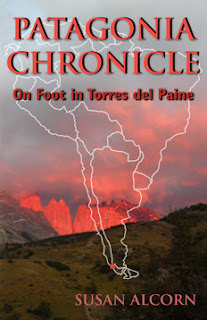 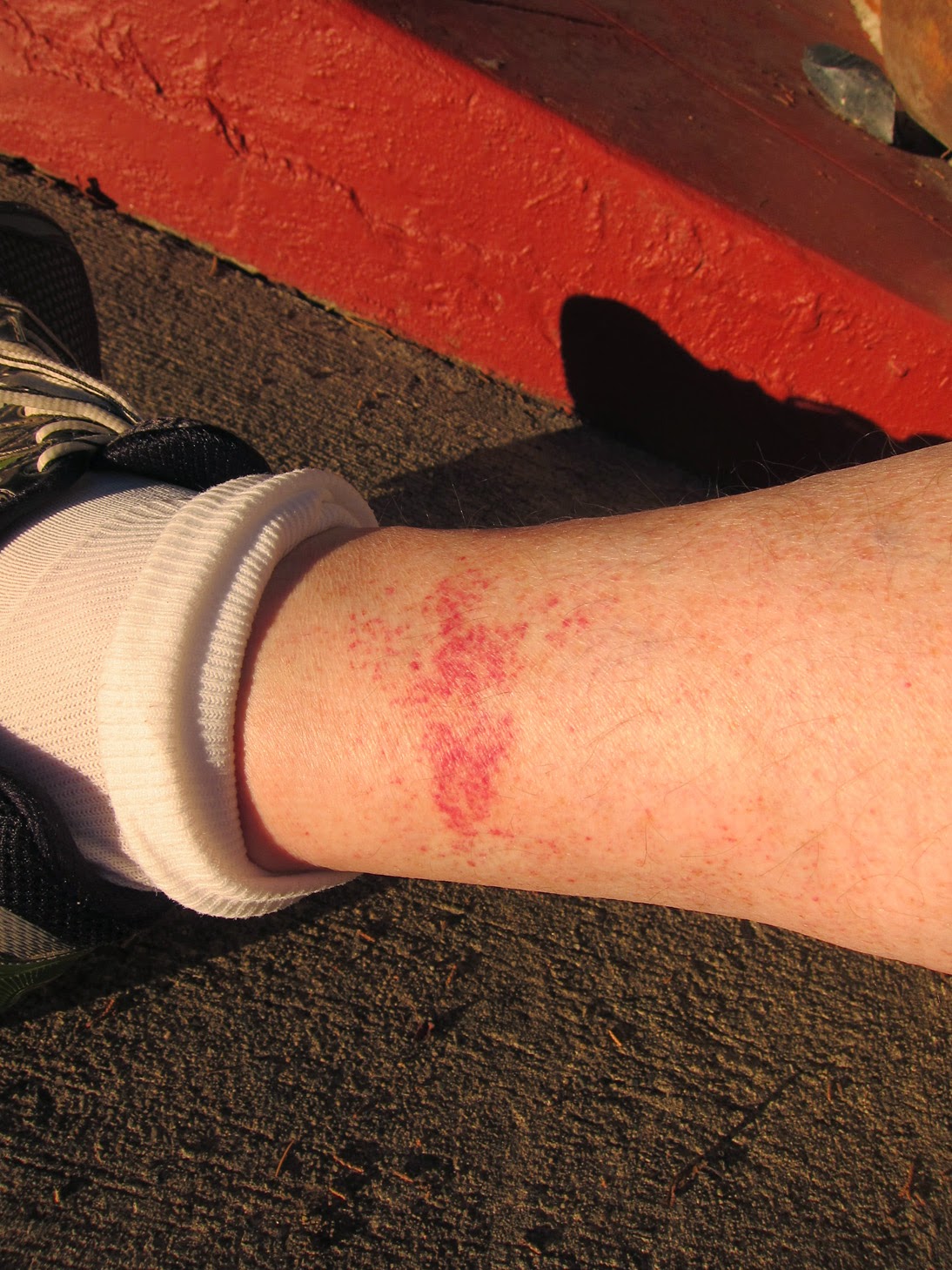 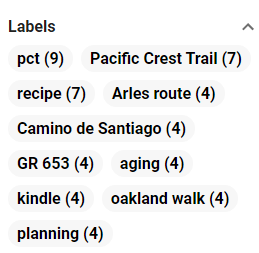