May 24, 2011 - update. We finished trip early at Córdoba due to knee problems. I did a trip report blog: Camino Mozárabe Images and Moments 2011. Also, I'll add some comments below as to the reality of the trip.

A running chronology of my planning process might help others. I am still doing this, so can't guarantee results. We don't have photos yet, so courtesy of Wikipedia, here is one of Mérida, our end point. This route starts at Granada, and joins the Via de la Plata at Mérida.

First step, guide books. We have Alison Raju's Via De La Plata which covers Camino Mozarabe, but it is 2005, so ordered the Confraternity of St. James 2009 guide by Alison. As I check Amazon, I now see that Alison has a 2010 Cicerone Guides for DLP

, but too late, I've already ordered the CFSJ Guide. ## we got the Cicerone Guide, and mainly used it, though we also had the cfsj guide.

Next on my list is appropriate websites for current route and lodging info. The one with  most accurate route information, including maps is http://caminomozarabe.es/index.php (##I printed and used these maps). .It does not have a list of lodging, but the route is drawn on the maps by the people who made it (the route). The CFSJ Guides recommends the Michelin maps 578 and 576, which are 1:400000. The maps in the site above, with the route drawn on them are clearly paper maps but closer to 1:200000. There is a Spanish government website with free downloadable maps of all types. You have to register to use it, but at no cost. The Provincial Mapas 1:200000 for Granada, Cordoba and Badajoz are fairly close. I downloaded all of those and checked against the site maps. On some of the stages, the site maps had more detail, and I printed their maps. On afterthought, just printing their maps would be sufficient. The Michelin maps give a nice overview.

I looked into topo maps I could load onto my gps - Garmin Vista C. It is elderly and doesn't have an sd card. If you have one of the newer Garmin that supports custom digital maps, you could use the maps from the Spanish website above, with some work, or you could buy the new Garmin Spain Topo Map. . All I could find for my unit was the Garmin Mapsource European Metro Guide V9

which is no longer available from Garmin. ## I manually copied the route from my printed maps above on to Mapsource, and loaded that route onto my gps along with the European Metro Guide. It was surprisingly helpful.


Ralph
Some links you may or may not have:
http://granadajacobea.com.es/
http://www.mundicamino.com/rutas.cfm?id=47
Alternate route - runs nearby the other route and I believe connect to it
http://www.malagajacobea.es/


From Neville's links I got to caminosantiago.org which has what appears to be a very useful page on town services: 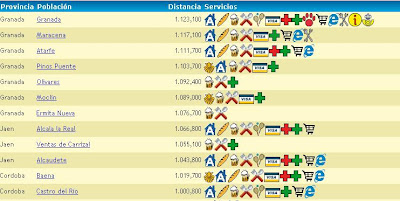 Getting there from US. We settled on flying to Malaga, staying overnight there then busing to Granada. Allowed one full day in Granada for sightseeing. On the return from Merida, you can bus or train to Madrid for the return. It is a little faster to get to Madrid than to Malaga for the return flight. The train connections to Madrid go at a more reasonable hour than the bus. ## we stopped at Cordoba so had extra days and checked into alternatives. bus travel between Granada & Cordoba is straightforward and frequent. From Cordoba, buses & trains don't go directly to Merida. You have to go south to Sevilla and then back to Merida, so we ended up spending a couple of days in Cadiz, a couple in Sevilla and a couple in  Madrid. We used the train for those connections.

I have an unlocked phone that we have used several times before. I just need to order a sim card for Spain from Rebelfone or equivalent. We have looked at satellite phones repeatedly over the years, but the expense is just too much to bear. Globalstar has just come out with a new one that is much cheaper, but their service has been iffy in the past. I am still thinking about a SPOT

, but it would primarily be for our wilderness hiking in the US, and just a means of letting our friends follow us in Spain.


Staying on the electronics thread, I am planning to take our Kindle. It should save a little weight over the books we normally carry. I've also put the route maps on it, but think they are too small to be useful. I will put Spanish-English dictionaries on it, but think finding a word will be cumbersome. It has a search which is slow. A binary search using the GoTo location will be faster ## The Kindle was nice for pleasure reading, but didn't use the language books much, even though they were on it.


## We took a wireless only ipod touch for internet. Most places now have Wi-Fi. Fewer have an internet terminal available than in years past. Ipod was fine for checking mail. Long replies or new emails took a lot of thumbing. It was ok for some internet searching, but not for complex websites unless they had an ipod/iphone app.


## Hotel-restaurants. If you plan to stay in one of these, it is a good idea to phone the day before, just so they know you are coming, and roughly the time of arrival. Three years in a row now we have had at least one instance where the place would have been closed when we arrived. In two cases they opened later (8pm). The other they would have been closed all night. Restaurants close usually from 4pm to 8pm, so if they know you are coming for hotel room and dinner, they will make sure someone is looking for you to arrive, who will show you to the room. In one instance where they normally would have been closed all night, someone came in to prepare an evening meal for us.


I haven't found a reliable source of pilgrim accommodations, though Neville's new info is promising. There appears to be an r&f (roof and floor) in most places, though it may be the same one used by the truly homeless. Mostly it is just hostals or hotels. Mundicamino.com has accommodations listed for this route, but I am not sure they are accurate. What seems to work is google maps for a location, and then use Search Near and specify hostal. I am assuming that when we are actually there,  we will be able to find any pilgrim accommodations if there are any. We are taking a tent and definitely will have to use it for at least one stage of 38 km. ##Found hostals & hotels ok. Mundicamino.com was accurate, as well as the cfsj and other guide. In Moclin, the alburgue is on the main square as you enter, and the bar on the square has the key. Didn't have to use the tent, as the big stage is beyond Cordoba, but did use a taxi to shorten one long stage.

Water looks to be a little iffy. There should be places about once a day, but since we will have to camp at least one night, and there are some long stretches, I am taking our Steripen

and one solid sided 1 liter water bottle (needed for the Steripen), as well as 4 of our flexible Platypus 2L

bottles, which take very little space or weight when empty, but are available if needed. ## 2L per person was plenty for us, but most days it rained. It can get very hot.

This appears to be a route requiring that you always carry enough breakfast and lunch food to last a couple of days. ## Carried food, but never used it. Always found a lunch spot.

I've put the day by day steps into a spreadsheet, and will release that to public when we get back.## camino mozarabe spreadsheet  I looked for an elevation profile, and couldn't find one anywhere, so made a crude one from our spreadsheet: 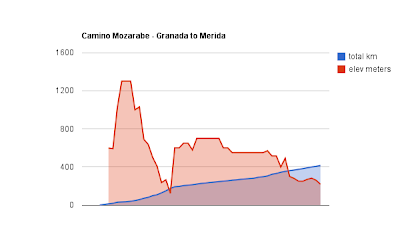 Posted by Timecheck at 5:50 PM 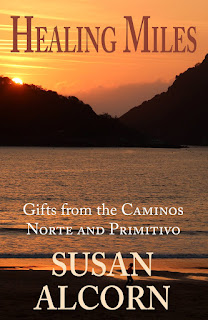 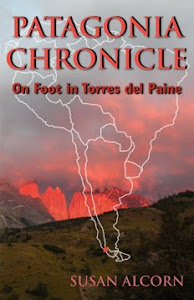 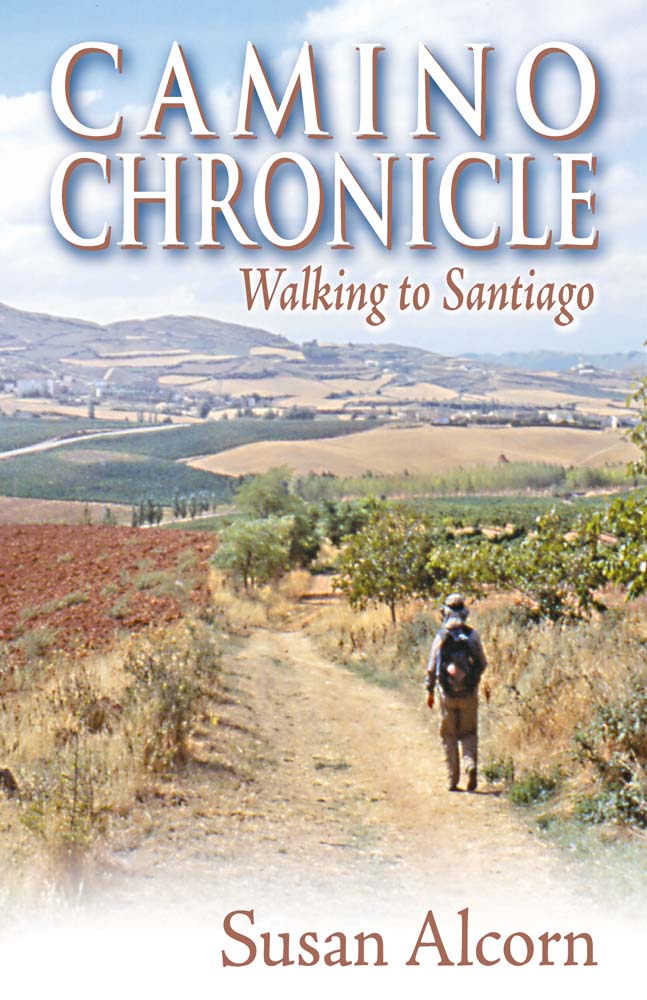 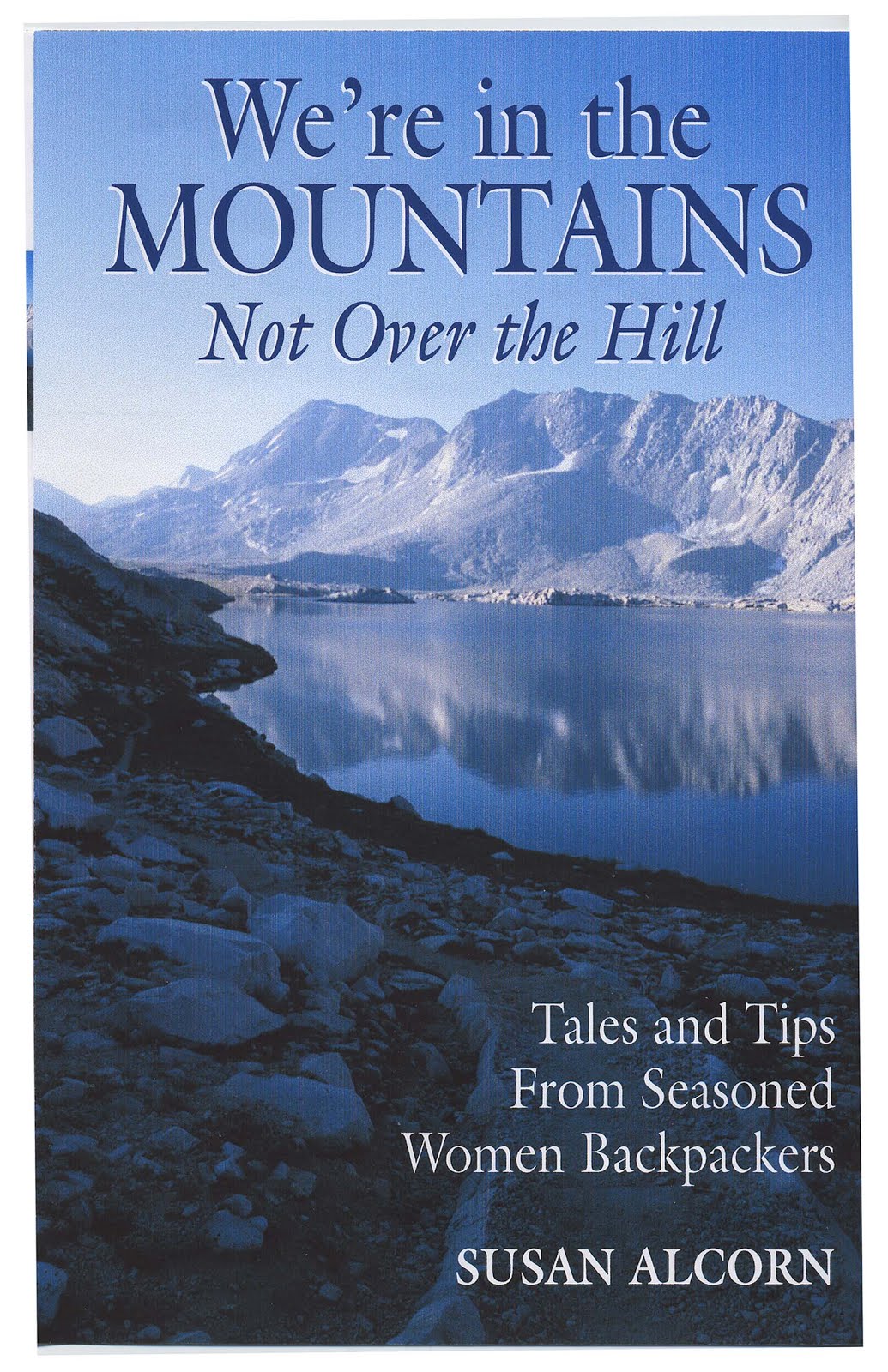